BIG NEWS!
First, I would like to congratulate those of you who are new automated trading clients of AlgoTrades.

And secondly I wanted to share that our automated investing system had its first trade since we opened the doors to clients a couple weeks ago. Because of the state of the market and high volatility the system automatically switched to its momentum trading strategy to take advantage of this week’s price action.

The trading system bought into the yesterday’s fear driven market 2 minutes before the market low and exited in overnight trading for a $2872 profit (REAL MONEY) for each client including myself. And it did this in less than 24 hours. We are up 5.7% on our starting capital in the first month already!

After bottoming in the first week of February the S&P 500 Index (SPX) never looked back and pushed considerably higher on strong U.S. economic data. Even in the face of horrific winter weather conditions that plagued most of the United States, risk assets continued to move higher.

By the end of February most of the previous correction had been totally recovered and the broader markets looked poised to test the recent highs. A breakout to the upside above recent highs seemed likely going into month end.

During this same time, several other asset classes performed very well. The areas that showed particular relative strength in the month of February were gold and silver futures. Additionally oil futures were equally as strong as all 3 commodities showed strong performance for the month of February.

A variety of reasons were assisting these commodities as they moved higher. Concerns late in the month helped push gold and silver prices higher as a flight to safety occurred as the situation in Ukraine started to intensify.

As Russia became more involved we also started seeing volatility emerge in energy markets. Oil futures pushed higher throughout February as geopolitical risks were mounting. It is important for readers to note that Russia supplies much of Europe with natural gas and oil. If Russia were to shut off some of the supply to the Ukraine and eastern Europe demand for other sources of energy in the region would likely increase. 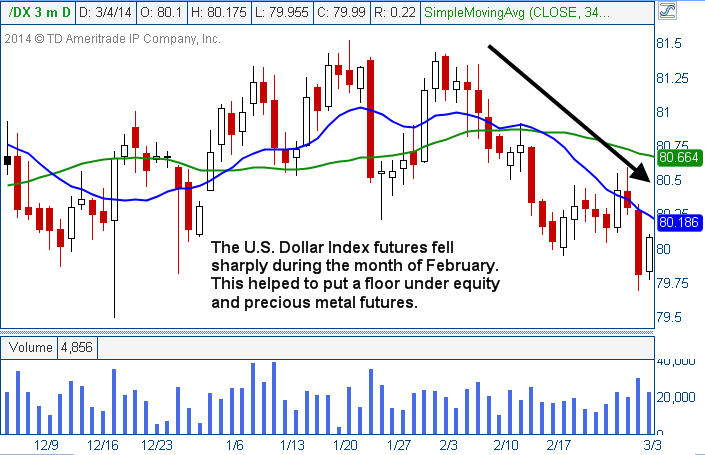 February was a very interesting month for financial markets and for the world. The Winter Olympics kept audiences entertained around the world for several weeks during February as Russia hosted the event.

While Russia was in the spotlight most of the month for a peaceful competition among countries in a variety of winter sporting events, the aggression that Russia would demonstrate late into February was mind blowing for many leaders around the world. However, what would soon occur as the month of February started to wind down was a potential conflict brewing in Ukraine which Russia was deeply involved in.

While the situation in Ukraine is far from over, Russia went from the host of a peaceful world-wide competition to a world power that occupied a sovereign nation during peace time. This controversial move was condemned by a variety of countries in Europe. The United States also was deeply concerned about the situation developing there.

As we move into the end of the 1st Quarter of 2014, we have a variety of themes beginning to emerge in the financial markets and geopolitical politics. Prices in equity indexes pushed to new or near all-time highs by the end of February. While major U.S. equity indexes were moving higher, we saw major strength in energy and precious metals futures and weakness in the U.S. Dollar and in U.S. Treasuries.

While nothing is known for sure, if the geopolitical pressure continues to mount it would be expected that some heightened volatility could be around the corner. All eyes are on the Ukraine and the financial punditry will be all over the situation there. The situation potentially could impact global energy and precious metals prices. If the Ukrainian conflict were to intensify enough, we could start to see money flowing out of risk assets and moving toward safe investments like Treasuries or gold.

Ultimately what really matters is price action. The best place to measure market fear is the volatility index. If the VIX and oil futures continue to move higher, it is likely that those signals will be a warning that the situation in Ukraine could begin to worsen.

The daily chart of the SP500 index below shows our current trend analysis with green bars signaling an uptrend, orange being neutral, and red signaling bearish price action. Currently the bars are green and we can expect prices to have an upward bias.

The Dow Theory could be  in play. When both the Transports (IYT) and the Dow Jones  Industrial Average (DIA) cannot make higher highs and start making lower lows, according to  the Dow Theory the broad stock market is topping.

We are watching the market closely because they have both made lower highs and lows.  This rally could stall in the next couple weeks and if so we expect a 8-10% correction. 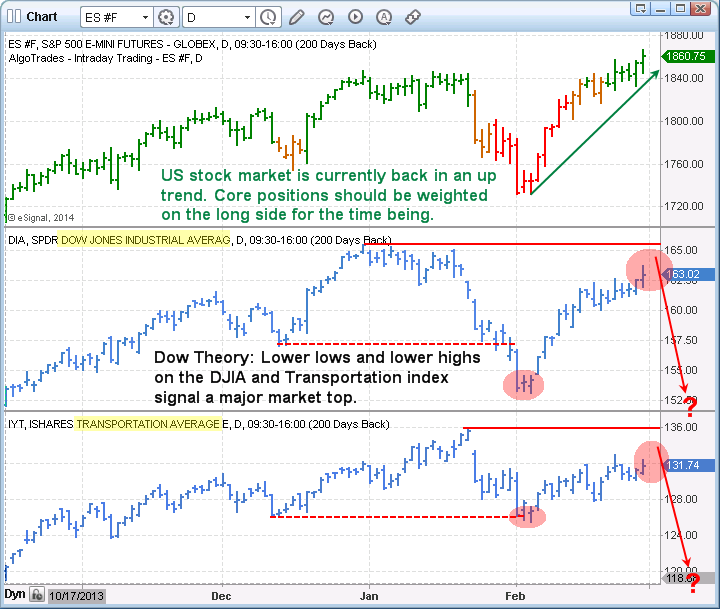 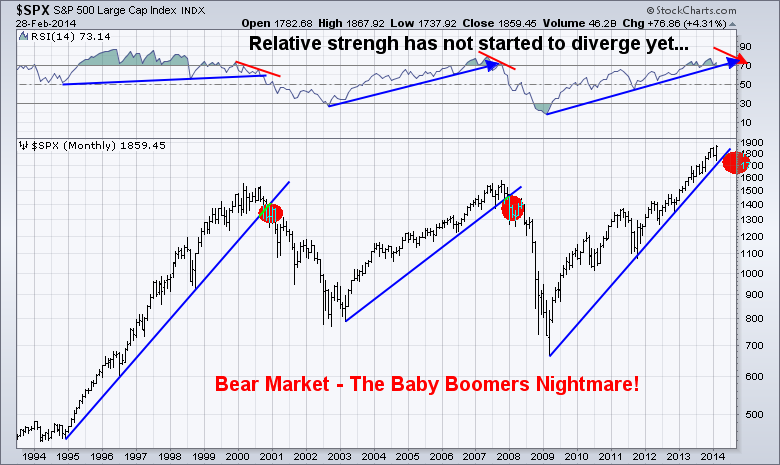 Having your capital invested during a time with stocks are undervalued and in a stage 1 or stage 2 market is the key to long term growth. If you want to learn more about how to identify and invest in these stages: Click Here

Your goal is to buy and hold investments that are starting a new bull market, and to avoid assets that are overpriced and in a mature bull market that is showing signs of the market topping (Stage 3 & Stage 4) which is similar price action of what we saw before the 2000 tech sector, and 2008 financial crash.

Most investors only focus on the major indexes to gauge the market strength and ignore other asset classes. Knowing that there is almost always a new bull market starting somewhere whether it is in a stock, sector, world index, commodity, real estate, bonds, currency etc…  it only makes sense to rotate money out of mature markets and into new fresh investments that show long term growth potential.

In the past month we are now starting to see a new bull market start and that is in the precious metals sector (gold, silver and mining stocks). Also we see commodities as a whole showing signs of a bull market starting which makes sense as commodities tend to perform the best when the US stock market is nearing a major top.

RISK ON OR RISK OFF? THAT IS THE QUESTION

In the last two months we have seen gold mining stocks surge in value and the best way to gauge this is through the $HUI gold bugs index chart.

While the SP500 index shown in the upper half of the chart with its broadening price pattern and rising volatility, we can see the $HUI index has turned bullish and is actually the strongest sector in 2014 thus far. 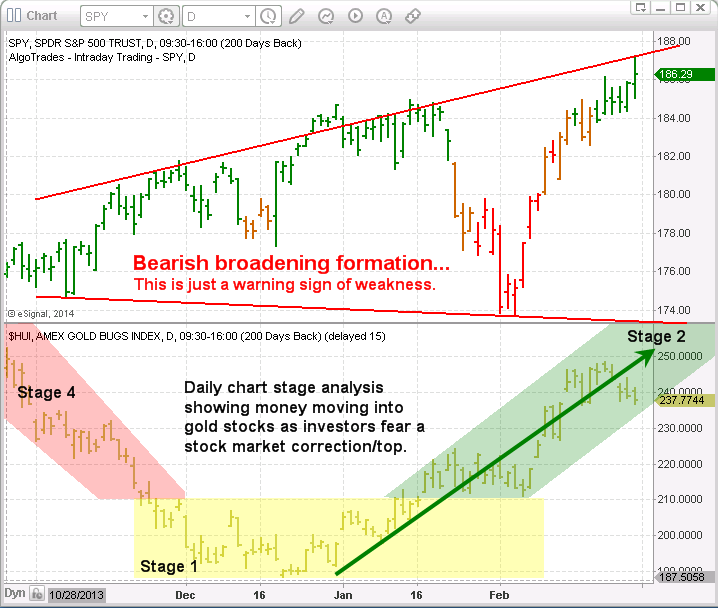 In short, investing for long term growth does not need to be complicated as a self-directed trader. Nor do you need to be hoping for your investments to continue grow. Instead you can make your money grow year after year no matter of the stock market direction if you focus on rotating your money into assets in Stage 1 and stage 2 patterns.

With very little effort each year (position rotation) you can rotate your investment capital out of mature markets and into assets which are starting a new bull market. All this can be done with exchange traded funds and you can follow my Model ETF Portfolio Click Here.

Algorithmic Trading System Is Out Performing The Market