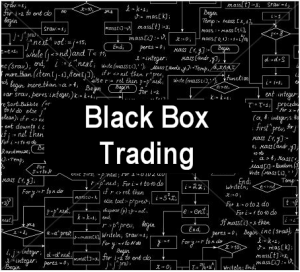 A computer is used in black box trading to cycle through a program to identify potential buys and sells.

The black box trading system will enter and close orders based on pre-programmed logic in addition to generating potential buys and sells. The advantage of this type of system is that a computer does not tire and can process tens of thousands of trades per day. A human being is incapable of handling this volume; additionally, a human being will make mistakes while filling out their trades.

What Is A Black Box Investment?

A person or company may use a black box trading system to generate profits, or they may simply use such a system to help with order processing. A black box system is used by some hedge funds and pension funds to help them manage their trades.

A black box is a device, system, or object in science, computing, or engineering that produces useful information without revealing any information about its internal workings. The explanations for its conclusions are still ambiguous or “black.”

A black box system is simply a computerized trading system that generates buys and sells based on pre-programmed logic.

Black box trading algorithm makes use of logic-based pre-programmed rules to determine the buying and selling of financial instruments. For example, an algorithm can be set up to buy a specific share of a specific company based on fluctuations in the dirham-dollar ratio, which is also predetermined and already set up in the algorithm.

Transactions are faster and more systemized, with no need for manual oversight. It can be thought of as a broker who is given a set of instructions that must be manually executed when the conditions are met. Because the broker is a computer that has already been programmed with the instructions, a large volume of transactions can be completed much more quickly and without the possibility of human error.

Without a doubt, the most talked-about black box algorithm today, with permission from Google, is that of the popular photography social network, which determines the publications that are shown to its users, their order, and frequency.

The algorithm that governs Google searches is an example of the best-known and most-studied black box algorithm. Certain factors are known to influence web positioning, but no one outside of Google knows exactly all of the parameters that influence a web page’s ranking, nor the percentage of the weighting of these parameters. Because Google is the undisputed engine that governs the majority of web activities, understanding a portion of its operation gives you an advantage over the competition.

A recent trend has been that of algorithms that collect our behavior, interpret it, and transform it into personal recommendations, as in the case of the platform of movies and series, in those that may interest us more depending on our tastes.

A black box algorithm is one in which the user cannot see the algorithm’s inner workings. It is a contentious system due to the secrecy and lack of transparency it contains, though its creators defend it as a security and privacy system to prevent data leaks and unfair competition.

Another feature of these algorithms is their dynamism; they usually present constant changes to adapt to the increasing pace of technology and provide value to their users.

How Does The Black Box Trading System Work?

The system is called a black box because its internal workings are secretive and opaque. As a result, each system is distinct and one-of-a-kind. Every black-box trading system, however, begins with a trading strategy that is then converted to coding language and integrated into the market.

The market is threatened by unregulated or unapproved black box trade practices. They can result in a loss for investors because many programmers sell it as if profits are guaranteed, resulting in market manipulation. As a result, regulating algorithm trading becomes critical.

Advantages and Disadvantages of the Black-Box Trading System

Black Box  is the future of the investment market and will be around for a long time because it offers numerous advantages.

While black box trading has many advantages, it also has some disadvantages.

Black box algorithmic trading is used in many areas. The major ones are discussed below:

The Black Box In Computing

Machine learning techniques that have greatly contributed to the growth and sophistication of black box models are closely related, and particularly relevant to machine learning.

Indeed, it has been argued that the operations of black box predictive models generated by algorithms can become so complex that no human could work through all of the variables involved in making a predictions

Engineering and the Black Box Model

In engineering, the black box model is used to create predictive models that exist in computer code rather than physical form.

The variables can then be observed, analyzed, tested, and revised without having to go through the costly and time-consuming process of building them in the real world.

The Black Box Model in Finance

The growing use of black box methods in financial markets raises several concerns.

A black box model is not inherently dangerous, but it raises some governance and ethical concerns.

Under the guise of protecting proprietary technology, investment advisors who use black box methods can conceal the true risk of the assets they recommend. This deprives both investors and regulators of the information they require to accurately assess the risk being undertaken.

Black Box investing is a type of trading that employs logic-based pre-programmed rules to determine the buying and selling of financial instruments. It is expected that the use of black-box trading systems will skyrocket around the world.

Because black box algorithmic trading is purely based on logic and does not allow for human emotions, it is said to be more profitable than manual trading. The market is threatened by unregulated or unapproved black box trading practices.

They can result in a loss for investors because many programmers sell it as if profits are guaranteed, resulting in market manipulation. As a result, regulating algorithm trading becomes critical.

Want to join the discussion?
Feel free to contribute!